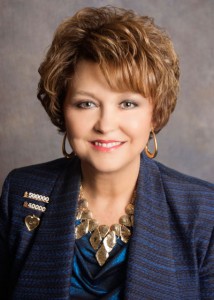 Terry joined Mary Kay in August, 1989 and debuted as a Sales Director in January, 1992. Terry has been a consistent Star Consultant and a Gold Medal Winner.

Terry has driven 13 Mary Kay Career Cars and she and her awesome unit begin qualification in January for Pink Cadillac #8!

Terry has led her unit to Unit Circles 14 times with the highest Unit Circle being the ½ Million Dollar Circle of Achievement where she was awarded a 4 carat diamond ring!

Terry was honored to be awarded Miss Go Give for the company in August of 2000.

Terry is married to Gene. They have beautiful twin daughters – Nicole and Dawn.
And 4 granddaughters, Lexi, Juliana, Christina, Maci and another grandbaby on the way!

Terry’s goal is to continue to help the women she works with promote up the career path and realize their dreams and to become a National Sales Director in this incredible company!